CBeebies's Gemma Hunt (pauses from being a Swashbuckling pirate!) to share how she overcame extreme anxiety during the time everything in her life changed- impacting her health and confidence. All of which happened at the same time as she started her dream job in television. 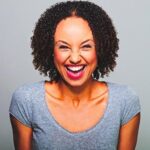