So, one of the most difficult things about this season for everyone but particularly for teens and young people, is this sense of just how out of control we are over so much stuff.

And this is particularly the case for you if you're one of the thousands of young people who were due to be sitting formal exams this summer: GCSEs or A levels. And you guys have been on such a roller coaster, you know you were told your exams were "cancelled" and then you hit lock down again and now in most cases you're finding out that actually you have to sit a bunch of tests which actually feel a lot like exams, but also that maybe other work is gonna be taken into account and make up your final grade. And it's like, 'Hey this is what you did before you even knew that pandemic was gonna be a thing: never mind that it was gonna count and oh my goodness!' or maybe there's other stuff that's making you feel super aware just how little control you have.

You might not be sitting exams this year but maybe you're even on Easter break and you're starting to hang out with people outside. And it's so good to be able to do that but there's always that question isn't there. ‘What if someone you know tests positive? What if you might have to isolate? What if your plans have to change? What's coming?’.

You know the need to be in control: it's one of our most basic human instincts, control helps us to feel safe. It helps us to know that we can avoid rough stuff or bad stuff, worst case scenarios. Things we don't wanna happen and it helps us feel like we can get somewhere. We can influence stuff. We can make a difference. We can change things. It's a massive factor in our wellbeing too and we know that moments or situations where we feel out of control are directly linked in your brain to triggering that combination of rubbish feelings that we call despair.

But, but I guess control is always a bit of an illusion 'cause there's always stuff going on that in theory can happen and we wouldn't be able to control it. So much of our life actually is outside of our control. So this moment there is some weird particularly challenging examples of things that make us aware of how true that is: but it's always kind of a bit true.

It's like skydiving, you can hold that position, hold your free fall. You can hold an element of control over life but there's always stuff going on that you can't change or you couldn't influence and sometimes there's that gust of wind that hits you and you just start spinning round and round and round, it's like emotional vertigo.

Number one, first and foremost when you feel out of control, it's a challenge about how you deal with emotions. You know emotions like anxiety: 'What's gonna happen? What if it's bad? What if something awful happens?'. Frustration: like 'I cannot believe this is happening. It's so unfair!' and just that energy sapping loss of motivation: that gloom of despair, like 'What's the point? Everything I do just goes wrong. There's no point even trying'. Those things are your brain's way of grabbing your attention of making sure that you focus on something, that you process something, that you think something through.

Be careful about instincts that are just about suppressing or trying to avoid those difficult emotions. You know so much of what we do is what psychologists call displacement.

It's just, it's like a short term way of taking your mind off something, focusing your attention somewhere else and those things aren't all bad. In the short term they might be good or as part of managing a season where life feels a bit out of control.

Some of those things can be really good but if they're the only thing you know how to do, just be careful because they can become part of really quite powerful negative patterns as you try desperately to manage feeling out of control but you're not facing up to it.

So things like using alcohol or something that just for a moment makes you feel better drugs, anything. Mental health stuff like, eating disorders or self-harm, things that temporarily or artificially increase your sense of control or feeling like you're mastering your own body. Even stuff like, like excessive exercise that's like an alternative way of feeling like you can control something 'cause there's so much else you can't. Those things can become negative. They can make you unwell. They make things worse in the long run.

So how'd you deal with those emotions more positively? It's basically about facing up to them instead of running away from them. It's about finding spaces and places you can process and share that stuff. So it could be on your own long walks, journaling: thinking things through. But much better is moments that you can get together with someone else to share what you're struggling with. Have a good hour chat to a mate or even find a professional safe space with a therapist. So think about how you do that.

Secondly, it's uncomfortable but it's true: we cannot influence everything but it doesn't mean you're helpless. You know we used to think that learned helplessness was something that happened when people hit tough stuff and it was linked with anxiety and depression.

What we now realise actually is that we learn we're not helpless. You know as kids you don't know yet that you can influence stuff, you can change stuff. You can make a difference and as you grow up you grow that a sense of realising that you can have control. You can have influence. You can do something about your own situation: solve your own dilemmas and problems whether that's little things like tying your shoelaces or learning how to get your own breakfast or bigger things like solving disputes or arguments amongst friends or finding a solution to a problem.

But for some people what early life has taught them is actually not this opportunity to realise they're in control but it has reinforced that feeling of being helpless or being a victim of bad stuff that's going on. So if you've had tough stuff in your childhood, if you've experienced trauma, been the victim of crime or violence that might have led your brain to draw this conclusion that says, "You know what? I am basically helpless there's nothing I can do when life is tough." And that feeling can extend way beyond when it's actually true.

Sometimes in difficult moments what we need to do is remind ourselves or even start again to learn the truth that we can have some control. We are not totally helpless. And this can be really basic, you know in the middle of lockdown or when your mood's really low, a lot of people find that it's hard to take control of even the most simple things. So something like getting yourself out of bed, getting dressed, eating proper meals, all these simple things can be thrown and that's a good place to start if you're really struggling.

So think about easy wins. What can you do that will get back a little tiny bit of a sense of order and control? Make you feel like you're not totally helpless? It could be just getting out of bed, taking a proper shower. Making yourself a cup of tea, taking it back to bed. Sometimes those little things lift your mood enough then you can try something a bit bigger.

So level two is about thinking what could you do to influence your environment to help you to feel a bit more of a sense of control and order? Could you tidy something? Fix something that's been bugging you for ages? Do a task that you've been putting off for ages? Could you sort something out, you know arrange all your books in colour or height order or tidy or draw or something like that? Or is there a craft you could do that is about finishing something, completing something you know build some Lego or do a puzzle? Do some needlework or knitting or something like that?

And of course those things don't change your wider situation, no, you might be sitting there thinking 'Well what's the point of doing that?': but the thing is if you can challenge that baseline feeling of helpless you lift your mood and your motivation you switch off that sense of despair and that helps you not only feel better in the moment but it will help you to take the steps that you need to take to do the things you need to do.

Because number three, third is about finding things that you actually can influence. 'Cause you know even in life's toughest moments when there's lots going on that you cannot change there is some stuff that you can change and the trick is thinking about what those things are.

So you might wanna get two pieces of paper and write on one 'Stuff I can't change', write on the other 'Stuff I can' and then brainstorm it. Get a mate to help you. Get someone to sit with you and think 'Here's what I can't change. I do have to sit exams in two weeks. What can I change? Well I can think about how I study. What can't I change? I cannot change the fact that I cannot hug my best mate or my gran or whoever it is. What can I change? I can now meet up with them. Maybe we could plan a really nice picnic. Maybe I could send them a card'. There's always gonna stuff you can't do anything about but there's loads of stuff you can. So think about what can you tweak to make it less awful, less frustrating, less all about stuff that's bad and you don't want, what can you tweak? What can you change?

And thirdly, there's always stuff even when life is really rubbish or difficult or challenging: there's some things that are just always good. They just always cheer you up. They just always make you smile. They're always about good moments. What are those things? Meeting up with a mate, sharing a joke, having a hot bath, drinking the perfect cup of hot chocolate, whatever it is think about those things and throw yourself into doing those things as well as possible.

So remember you can't control everything but that doesn't mean you're spinning out of control. What could you do today to help yourself feel better even in a tough moment? 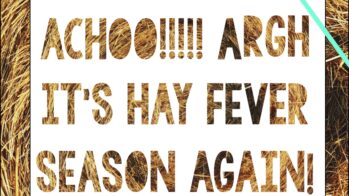