So we're in the midst of pandemic and life can feel pressured and tough. And, you know, one of the reasons that this season can feel so difficult, is because it feels so much about our human limits: it's like we got so close to the end of ourselves, the limits of ourselves, the limits of our human cleverness, with this little virus that's knocked out the whole of normal life... the limits of our human control like we can't control the impact that it's having. What if it mutates and things just go even crazier? Or we don't manage to resolve it? And limits to our capacity because we're all exhausted and sick of it and we're just like, 'what if this goes on for more months and it's doing my head in' and ugh. We're near the end, we feel at our limit. And this video about things that can help us dealing with pandemic pressure, is about another P, it's about prayer.

And this is about reaching out and connecting with something that is beyond our human limitation, beyond us as humans. Because the question is, when you reach the end of you, is that the end? Or is that a space where you can reach into something bigger something better, something beyond yourself?

There's this verse in Philippians, in the New Testament. It's Paul writing to the Christians who lived there at the time and he gives them this advice. He says, 'don't be anxious about anything but in everything through prayer, bring your request to God and a peace that transcends human understanding will guard your heart and your mind'. And Paul uses there, 'cause he wrote it originally in Greek, he uses this beautiful word. We translate it as don't be anxious, don't worry but the word literally means these moments when there is just so much going on in a moment, so many demands, so many worries, when you just feel like it's just relentless the demand and you're being bombarded by stuff that's tough or anxiety provoking or challenging. It feels like your mind is literally being pulled apart. You feel torn apart under the pressure. It's about that overwhelm zone which is so much a part of this season that we've been in. And Paul says, don't be pulled apart by that stuff. When you reach your limit, don't let yourself get to that place: instead turn to God, reach out to something bigger, something better than yourself.

There's another thing that Jesus said in a famous talk of his called the Sermon on the Mount. And he said, you're blessed when you're at the end your rope, when you're at your human limits. With less of you there's more of God.

You know, sometimes when we reach the end of ourselves, we're forced into this space where God can really have his influence and where we can discover things about God that we wouldn't do normally. That can be a place of potential, a place of possibility, a place that's even exciting. Sometimes managing life's pressure is about changing your perspective, changing what you're focused on, changing what you're looking to.

You know, there's this story in the new Testament, it's a story about the life of Jesus and his disciples and it's a super stressful demanding day. It's in Matthew 14, and there's this moment where Jesus tells the disciples to get into a boat and to sail across this big lake. And he goes off into the hills to pray and they sail into trouble and they're exhausted and they're scared. And they're in the middle of stormy times, they've come a long way but they've still got such a long way to go and they're desperate. And Jesus walks across the water to meet them, to come to them in that moment and he says to them, 'do not fear'.

And the question is, what is Jesus actually saying to them in that moment? Is he saying they're wrong to be afraid, to be anxious, to be exhausted? No, actually what he says to them here, is he uses a Greek word which refers to a very specific kind of fear. It's the kind that makes you feel like you can't cope with what you're facing. The kind that makes you feel utterly overwhelmed. Like you can't manage everything that life is throwing at you, you're in way over your head. Like your only option is to get out, to run, to escape: it's about overwhelm, it's about this zone that we've spent so much time in in this season.

You know, Jesus, isn't telling them off, he's telling them they can trust him, they can reach out to him. He's saying 'it's okay. I know you're at your limit, but I'm here. You can find courage in me. You're not gonna drown, you don't need to run'.

And there's this brilliant moment 'cause one of them is this guy called Peter, he's like super impulsive, he like does stuff first, says stuff first, thinks about it way later, gets him into trouble sometimes. But it's like, he realises how awesome this is and what Jesus is saying, the potential of it. Like 'hang on, if you're saying I can reach into God's capacity, God's cleverness, God's control when I'm at the end of mine, then I could do anything'. And so he says to Jesus, 'call me to you'. And Peter gets out of the boat and he walks on water too. It's crazy, he should never have been able to do that. I mean, don't forget as well it's not like a clear calm day with like a crystal clear, tranquil lake. It's the middle of the night and it's stormy and windy and rainy, but there's this human moment, Peter's having this amazing spiritual moment.

But then his humanity kicks in and it's like his brain's attention is suddenly drawn to the wind and the waves and the darkness and the risk and it wins and it grabs his attention and suddenly he's terrifyingly aware he's out of his depth.. and he begins to sink into panic and overwhelm again. And that's real life, that's real faith. It's what it's like to be human. We're caught between our humanity and our spirituality between the pressure of the moment and the potential and possibility if we can reach out to God and get that right. I'm not saying that you'll never feel tough stuff again, that you'll never feel overwhelmed again but the more we can learn to reach out to God and harness the potential and the possibility of prayer and of what God can do through us, in us, in those moments. I mean that's amazing.

And, you know, Peter does exactly the right thing as he's sinking: he cries out to God and Jesus immediately reaches out and pulls him back to safety. You know, our culture tells you that that the way to succeed in life is to get stronger, better, cleverer, more superhuman. We're desperate to think we can just keep extending our limits, that we can be invincible, and that if we slip up, maybe it's about weakness or failure, but it's just about being human. Actually, what God wants us to do, is recognise that we do have limits. We're a bit rubbish on some days, but that's okay because in those moments, we can reach out to something beyond ourselves.

So think about prayer. Think about how you can change your perspective. Think about the concept of awe, A-W-E. Awe is that awareness of something bigger… it's the moments when something deep within you realises that God is there, that God is real, just has that moment of connection. It's what you feel when you go and look at the stars on a dark night or a really amazing view or a brilliant sunset or something like that. 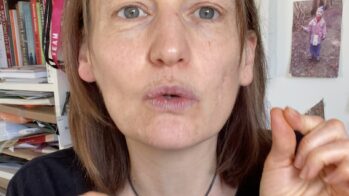 Lost it with Lockdown?