There's a tightrope walker at Niagara Falls. And he's really good, right? He's got his line across the top of the waterfall, and he is walking back and forth. And obviously, while he's doing this, this crowd forms because he's walking on a tightrope across Niagara Falls. So he's doing this, and crowd getting really into it. So he does it back and forth, back and forth. And then he gets a wheelbarrow out. I presume they could have seen the wheelbarrow. That's just not something you can just pull out your pocket and hope no one has noticed before. So he gets this wheelbarrow out and he pushes the wheelbarrow across, and he pushes the wheelbarrow back. And the crowd are going mad. And then he puts the wheelbarrow away and he gets a blindfold out. And he puts his blindfold on. And by this point, the crowd all losing their mind. And he walks across the waterfall back and forth with this blindfold on. And then he turns to the crowd that have gathered and he says, "Okay, one last thing I think I can do. "Do you think I could blindfold myself "and push the wheelbarrow across at the same time?" And the crowd are going "Yeah" Something like that, anyway. They are going for it completely. And he points to this one a little lad in the crowd and says, "You, do you think I can do this?" And the kid is like, "Yeah, you're amazing. "You can do this." And the tightrope walker looks at him and goes, "Get in the wheelbarrow then." I've been thinking a bit about this story recently. Where was the bravery and courage in this story? Because, okay, what the tightrope walker is doing is really impressive, right? But like he knows he can do it. He knows what's going on. And it's not the first time he's been on it. I mean, if it was the first time he'd been on a tightrope, that would have been really impressive. And what is it about this invitation to this boy that is brave thing here? What is the courage that he is calling out of him? What does it mean for this kid to be brave? Because yeah, obviously it's pretty brave to go and like sit in this wheelbarrow and do this. But the invitation to courage in this lad is actually an invitation for this kid to like live up to what he has said he believes. Okay, you believe this, then do something about this. The moment of courage for this young lad was about this choice that he made, the choice that in this moment of challenge where it's like he is challenged about whether he can live up to what he says he believes, that is the moment of courage. And courage is when he steps out, gets in the wheelbarrow and says, "I'm gonna live like I say that I live." Even when that truth felt riskier than ever. Or what about Marcus Rashford? Marcus Rashford, this amazing young footballer who for the past 18 months has challenged and caused change and compassion in this country by speaking up around issues around poverty and food poverty and illiteracy. Giving a voice to people who were often voiceless within society. But he's done this time and time again, even in the face of criticism, as people have told him that he just needed to stick to kicking a ball around. And so in the summer at the Euros, in the biggest moment of his professional life, he steps forward to take a penalty. If he scores England would have been in with a really good chance of winning this massive competition. And he misses the penalty, he hits the post. And after this has happened, him along with teammate Bukayo Saka, Jadon Sancho received this horrific racial abuse online. And if ever there was a moment for Marcus Rashford in the face of challenge, in the face of hatred to step away from who he was, from what he's been talking about, it was this moment. "Hey, Marcus, maybe this isn't the moment "keep criticising the government. "Maybe this isn't the moment to keep doing this." But that's not what he's done. He has continued to speak out. He has continued to elevate voices right in the moment that it feels riskiest to do so. it's been a funny couple of years, right? Like, all of us in different ways over the past 18 months have lived lives that we haven't been used to. What has it meant for us to continue to be who we are, continue to be who we were made to be at a time when stuff has changed, when stuff has felt more challenging than ever? Who does it mean to be who I am when I can't leave the house, or when all I can do is talk to someone on a screen? The temptation when these things come is always to change, but sometimes courage is the invitation to remain who we are, true to who we are, true to what we believe about ourselves and true to what we believe about the world at a time when it's easiest to change who we are. You know, the internet doesn't help, right? Like, the start of the year, you go like, "New year, new me, new year, new me. "New stage of the pandemic, new me." What if the invitation to courage in this time of challenge and change, when everything is so different to what we've known it before, is not the invitation to be someone new, but it's an invitation to be more committed than ever to who we are right at the moment that it feels easiest to change. 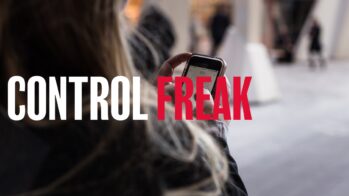 WHEN WHO YOU ARE ATTRACTS THE WRONG ATTENTION 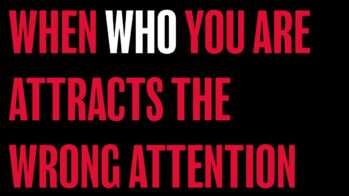