Hi, I'm Sarah, I'm 17. And my life has been fairly normal. I guess everyone's normal will be different. But for me it was doing alright at school, and I had a good group of friends, a really supportive church, and a family who loved me. But then around a year and a half ago when I was doing my GCSEs, stuff started to get downhill. And I realised I was getting more anxious and worried about various things.

I managed to open up and tell my youth worker about what was going on, which did really help, but stuff carried on to go downhill. And I ended up self harming. And for me this was really hard, because I felt like I didn't have anyone to talk to you or open up to who would actually get what was going on.

But a month later Alumina was recommended to me and I had a look on the SelfharmUK website and decided to sign up. Alumina is basically a six week course for 14 to 19 year olds who are struggling with self harm. I found it really safe and supportive community. And it quickly became one of the highlights of my week. And it was very encouraging and welcoming.

Another thing that got me really at ease was that it was anonymous, and it wasn't face to face which helped me be more open about what was going on. I knew that talking did help even though I found it really hard to.

So I decided to go down to a mental health and wellbeing charity where I live and told someone from there. It did take me a while to be able to open up and properly break down my walls, but I'm still talking to them now and it was over half a year ago. I've just found it really helpful to be able to get everything off my chest each week.

One thing that has really helped me though, is making this self-care box and I've added lots of positive quotes and good memories. So when I'm going through a rough patch, or I'm struggling a bit more, it will really help me remember that the moment will pass.

So yeah, I can see myself improving in some areas, and in some areas not so much. But now I know that if I have the right support in place that I can push through. So if you're going to take anything from this, please know that you're not alone with what you're going through. And as scary as it is, it's really good talk. So please reach out and talk to someone.

Find out about our free online support for 14-19s struggling with self-harm.

Managing anxiety whilst achieving your dreams 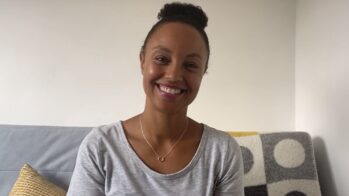 When all the things you thought you had are gone