Hey, my name's Laura, and I work for Headstrong. And I wanted to just chat to you today around one of the biggest challenges that I've faced over the last three years. And that has been living with depression. Now I'm in a much better place than I used to be, but I still have days where I wake up in a complete cloud sometimes. And I've had to find ways to manage my depression and to live with this. And so, along the way I've picked up some really, really good things. And I just thought it would be really good to share some of that with you today.

A little bit about me, I have recently just moved to the sticks. I live in the middle of Somerset in the tiniest little village. I have a husband called Julian, and a cat called Phoebe, and a five-year-old daughter called Timber. Now, one of the things that I have found that has really, really helped me on days where I've woken up and I've just known instantly that I wasn't gonna have a good day and that I was struggling, has been my Spotify playlists.

Now, I used to have such a big thing where I was so hung up, the music I listened to had to be really credible, and I really cared what people thought about that. But I found, actually, since I've been making playlists, and particularly around my mental health, there's been like three things that have been really, really important in kind of how this has all worked for me and I just thought you might find it helpful.

So, the first thing is, is that my playlists are for me. I listen offline a lot of the time, so nobody can even see what I'm listening to. And I actually, if one day I wake up and what I really need is just cheesy pop, then that is what I put on my playlist and that's what I listen to. And that's been really important for me, the just releasing that pressure and that expectation that I have to be a certain person or listen to a certain type of music.

Number two, a good playlist is worth a labor of love. It does take a long time. But actually, you can get a massive sense of satisfaction as well. And I do, when I look back on my catalog of different playlists that I've got on my Spotify, and I'm quite proud of them. You know.

And then the third thing is that, your mood changes, and so your playlists have to change. So I have got all different playlists. I've got ones where... I've got one that's called, "Keep Going" that I literally can put on on days where I just need to get up, I need motivation, I need energy. I've got others that are more there to kind of calm me down or support me, if days that I wake up and I just feel I have to be a bit kind to myself and a bit gentle. I've got others that are really just put together from memories and friendships I've got and good times I've had and things that just take me back to that place and remind me.

So I just really encourage you to think about music and think about how you use it in your life, because for me, it has been really, really powerful. So, really, just enjoy making some playlists. Thanks.

Biking my way through lockdown 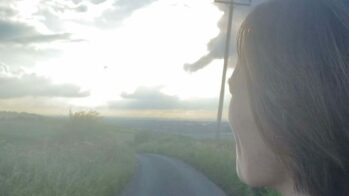