Hey, Headstrong UK, how you doing? My name's Martin Saunders. I want to talk to you today about a big Netflix smash movie that you've probably heard about. It's called "The Social Dilemma." It's a film about social media and other technology and how despite all the good stuff of those things, some of those things that we really love can also have a bit of a dark side.

So, the film features loads of people who've worked in the tech industry for Google, Instagram, Pinterest, and lots of different tech companies. And it's currently one of the most watched shows in the world especially among younger viewers.

Why is it so popular? Well, first of all, because it speaks with real authority. These aren't just people with opinions. They actually worked on the inside of the tech industries that they're worried about. And the second thing is maybe right now it's popular because we're all feeling a little bit screened out. Six months of pandemic living and having to use screens for school and for work and for friendship and for entertainment. We're all starting to question whether this is really quite as healthy as we thought. And then the third reason I think it's really popular is because we kind of know deep down that if something's free, sometimes there's a hidden cost to it. Like, is it really free? A guy in the film actually says, his name is Jaron Lanier, he says, "If you're not paying for the product, you are the product." And that's the big concern. That's at the heart of "The Social Dilemma."

It's a really great movie, if you haven't seen it. It's kind of part documentary where you've got these talking heads interviews with all these tech insiders but also you've then got this narrative storyline going on at the same time where you get the story of a kid in American high school and how he uses his phone and how his phone starts to use him and his family and how that's true of them too. And then there's this other stream to it, as well which is really interesting which is kind of set inside his phone. And it shows you how your phone is trying to impact and influence you, sell you things, control you, make you use your phone more and more and more. So really interesting perspective ideas about social media and technology.

And if you've got to the end of the film and you're starting to think and worry about how much of your life you're starting to lose to these apps that are trying to hold your attention all the time, a little bit like I have, I wanted to run through just five simple practical things that you might be able to do. Some of them are a bit more involved and scary than others, but here are five ideas for things that you could do to respond to "The Social Dilemma."

So the first one is go through your phone and have an app purge, you know, all these apps they track your movement, they track your spending, they track your activity. Don't have apps on your phone that are going to do that, if they're not offering you anything, you know we've all got random games that we downloaded and social apps that we never use, get rid of them. You don't need them on your phone. All they're doing is tracking your information and sending it to someone else.

Second idea, try putting your phone away for a period of time maybe just two or three hours when you would normally have access to your phone and just notice what it does to your mood. I think first of all, you'll notice a great sense of absence and loss, but what else do you sense? I think you might learn something by just seeing what it does when you put your phone away. That might motivate you to make some more changes.

Third thought is that you introduce a kind of digital Sabbath or a digital day of rest each week. Now that might be a bit scary. Maybe it's not a whole day but certainly a period of time when you put your phone away. And again, notice what that does for you.

Fifth and final idea, this is the hard one. Take the apps that you can't resist off your phone. And then if there is one, just use the desktop version. Now I've done that recently. Having watched the film has terrified me. I've taken some of the old people, social media apps like Facebook and Twitter off my phone, Instagram as well. And I now use them much, much less because I'm using them online.

I feel so much better by the way, I would really encourage you to think about some of this stuff. In the film there's this scary quote, "That there are only two industries in the world which call their customers, users. The technology industry and the illegal drug industry." Think about that.

Ultimately though, you want to be sure that it's you using your phone and not your phone using you. Thanks. 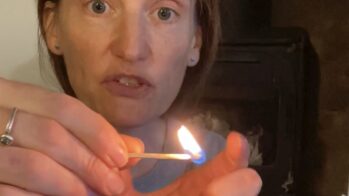