Hi everyone, My name is Andy Croft and I help lead a church in Watford called Soul Survivor Watford.

When I was 16 years old, I got dumped by my girlfriend of the time. And we'd been dating on and off for quite a while. And I don't blame her for dumping me. I was not the best boyfriend and looking back, I would have dumped me too, but at the time I was pretty devastated. And I remember strangely, I didn't tell anyone. I just put the phone down and I just went downstairs and pretended it hadn't happened.

And then I still remember the next morning I was getting ready to go to school. And I was feeling all kind of churned up and I just said to myself, I'm never going to let anyone hurt me again. I made this kind of like promise to myself, no one will ever hurt me again. And in order for that to happen in order to sort of like keep that vow, I didn't do this consciously at the time, but what I did is I just started to protect myself and I was fine with people and I was friendly and I had some good friends, but there was a part of me that I always kept hidden. There was part of me that always kept tucked away.

I became a Christian, not long after that. And a few years later, Jesus just began to help me realise that that's not always the best way to live. It's a really understandable thing to say no one's ever gonna hurt me again, but where it can lead to is a place of loneliness.

So a number of years later, I was at university and I found myself talking to this guy in a bar and there is a friend of mine, he just been dumped and he was kind of sort of telling me how he was gonna be fine, he said, I'll be fine. I'll be fine. I'll be fine and he said, you see the way that I live my life is this. So I think of myself like a castle and I have kind of like the outer wall and then I have the inner wall and then right in the middle, I have the keep. And he says, sometimes I let people behind the outer wall. Sometimes I let people behind the inner wall, no one ever gets into the keep. And I knew exactly what he meant because for years after my heart was broken, that's how I decided to live too, which was, you know what? People get to know some of me, but no one's ever really gonna know the whole of who I am. And what changed for me was getting to know Jesus.

And if I'm honest, it was seeing the way that God does relationship with us because vulnerability for me had become a bit of a dirty word. I don't wanna be vulnerable because if I'm vulnerable, I'll get hurt. And yet Jesus, and the way he does relationship is so real and so raw and so honest and he lets his friends see him cry, he shares with them his concerns, and his heart's desires, and he does real relationship. And I realised after a while that what happened is I tried to numb the pain, but you can't selectively numb emotion, you numb some of it, you end up numbing all of it. So I numbed joy, the ability to really give myself and give my heart to anything. And I realised that the way I'd done life, by putting on all the armour, wasn't the way I wanted to carry on doing life. I wanted it to have deep, meaningful relationships. I wanted it to be genuinely close to people. And the way that changed from that point on was I asked God to help me.

And the main way he did it is by fitting me with his Holy spirit and softening my heart, which I'd heartened. And that didn't happen in one moment. That happened really over a long period of a couple of years of just coming to him and asking him to just change me.

And the other thing that made the difference was choosing to put myself out there with a few close friends and just tell them what was really going on. And where I find myself all these years later, is a risk being vulnerable and sometimes you do get hurt, but the risk of not doing that is ending up pretty lonely and it's worth the risk. 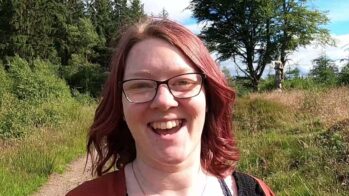